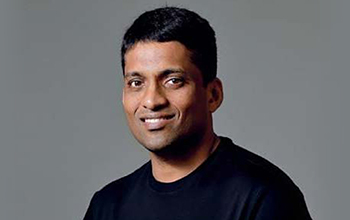 The Kerala-born Bengaluru-based entrepreneur is quite a fan, and player, of the beautiful game.

“At school, I played all day (but) ensured that my studies never suffered. I can completely attribute this (playing football, badminton and table tennis) to the life skills that I learned on the sports field—performance under pressure, controlled aggression, leadership skills etc.

HIS EPONYMOUSLY TITLED edtech behemoth Byju’s might have e-learning modules on subjects ranging from math to coding and every bit of the syllabi in between, but there is one area Byju Raveendran is mighty proficient in and is yet to start teaching—football.

"Byju's Legacy will not be all the unconuntable zeroes in Think and learn's financila statements, but the edtech revolution he sparked off and how it could empower the next generation." Fast forward to 2021, and Byju’s has been on a roll. Raveendran gave up his shipping job and launched his company just 10 years ago after his friends told him he was good at teaching—on holidays, he used to teach friends and well-wishers how to crack exams. The app itself was launched only in 2015, but since then, the tills have not stopped ringing.

Byju’s became a unicorn just three years after the app was launched. At the latest funding round last month, the valuation had shot up to $21 billion!

Even more impressive is that while many unicorns are still in loss despite their high valuation, Think and Learn, doing business as Byju’s, turned a profit in 2019 itself. Currently, the company has more than 10 crore registered users and 65 lakh annual paid subscriptions.

Raveendran’s appetite for expansion is scary, even if it has been grudgingly effective so far. Take just 2021—in April, he shelled out nearly a billion dollars to take over Aakash, one of India’s biggest coaching chains. One month later, he acquired the on-demand tutoring app HashLearn (amount undisclosed). The pace only quickened since. In July, Byju’s took over rival company Toppr ($150 million), US-based digital learning platform Epic ($500 million) and Singapore’s Great Learning ($600 million). In August, it was the turn of the AI startup Whodat (amount undisclosed). And another month down the line, exam preparation app GradeUp (undisclosed) as well as coding startup Tynker ($200 million).

Earlier this year, Raveendran went international, entering the US, the UK, Mexico, Brazil and Indonesia through its Future School offering. Within India, Byju’s has been on a real estate buying spree, snapping up huge properties in Bengaluru and Mumbai, with plans to start hybrid plots where online students can visit physically.

child approach wraps the student in words that develop their 'funds of knowledge' and increases their capacity to bend words to their will which opens pathways of curiosity, creativity, and neural pathways. This approach assumes cognitive and environmental variables that have historically been left out of the conversation when addressing how to equip children with the word knowledge they need to achieve levels of proficiency in reading, plots where online students can visit physically.

His appetite for big funds unsatiated, an IPO is on the cards in 2022, where the valuation could jump to possibly as high as $45 billion. “It is essential that we take risks, dream big and keep high aspirations,” said Raveendran, adding, “It is also essential that when something works, we scale it up as fast as our capabilities allow.”

But the big targets and big bouquets have also exposed his flank to big brickbats. Allegations have been flying fast and thick about the company’s aggressive sales methods, with detractors alleging that the company’s hard sell and toxic marketing methods prey on susceptible parents swept up by the trend, who sign up for its expensive teaching modules, despite not being able to afford it. The company denies it, and even took one accuser to court for defamation recently.

Byju’s legacy will not be all the uncountable zeroes in Think and Learn’s financial statements, but the edtech revolution he sparked off and how it could empower the next generation in India’s hinterland.

“The real fun is not in creating a billion-dollar company, but helping millions think and learn better,” he argued. Perhaps it would help him if he remembers that lesson from football—it is not about unbridled aggression, but a controlled one.

AI Taking over the Education Industry