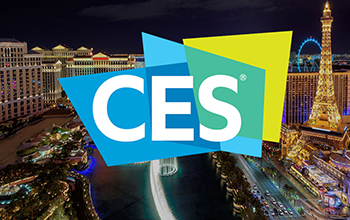 CES 2019 brought with it many interesting new technologies and products. To learn more, we spoke with Manroop Sandhu from Walmart Canada who attended the show.

CES is the world’s largest annual electronics show, an event where top vendors from around the world show off their new wares. To find out the latest trends in technology across a variety of categories, we spoke with Manroop Sandhu, electronics category manager at Walmart Canada. Here’s his take on some exciting new electronics products he saw on the CES 2019 show floor!

Paul: Every CES seems to bring a greater focus on the proverbial “smarter” home. What trends did you see in the smart homecategory?

Manroop: Voice assistance is here to stay; it’s not a fad, it’s not a technology that’s exciting for a few years and then dies off. It’s starting to have application across the home more broadly than I ever thought it would. You’re telling your sink to turn on now, you’re telling the temperature of your water to go up a couple of degrees. We started off with a Nest thermostat saying “hey Nest, or hey Google, turn up the temperature in the home two degrees.” Now it’s “hey Google, turn on the bathroom faucet and put it to 33 degrees Celsius.” It’s getting that specific.

Paul: Are you finding that we’re still going to be controlling smart home product individually with apps, or is the market leaning towards hubs like Google Home?

Manroop: It’s a hybrid of the two, and companies are now starting to have them work together. Take Samsung for instance, they have the Bixby personal voice assistant, but now you can also control some of their devices using Google. Eventually, all these devices are getting connected together, and you’ll be able to perform commands through a single smart hub.

Paul: What was your biggest smart home takeaway from CES 2019?

Manroop: There were no revolutionary categories if that makes sense. Technologies are getting developed within their own category. Smart home devices are getting smarter. TVs are getting higher resolutions. Smartphones are getting faster networks. Whether it’s an appliance, a showerhead, or a vacuum cleaner, everyone is trying to find their way through this smart home wave. There’s momentum building, faster than in previous years. A few years ago smart home was spoken about, but there was a low adoption rate. With voice recognition, it’s been really blowing up the past two years. Now that we have central hubs like Google Home, companies are building smart home products that can all be integrated together.

Paul: Self-driving vehicles has been a hot trend in tech the past few years, any highlights from CES 2019?

Manroop: Autonomous vehicles were huge at CES 2019. You’ve got A.I. mixed in with autonomous transportation now. So imagine you’re in your car, you’re sitting in the back, and it’s seating 12 people. It’s a large, open-space vehicle and everyone is all very comfortable because no one needs to drive anymore. We know autonomous cars have been around for years and are being tested today, but CES really conceptualized how far this can go. You can be sitting there having a theatrical experience inside your car. You can watch a movie and feel like you’re in a theatre because you’re completely immersed in a closed space. There are speakers all around, and now you have a full entertainment experience in your vehicle. All the while your car is taking you safely to your destination. During travel you can ask for an update: “OK Mercedes, how long until we reach our destination?” You just ask your car, and it’ll tell you. You’ll no longer feel like you’re driving with these vehicles, it’s your own personal space that’s moving you to your desired location. It’s like an extension of your home where you can do many of the same things you’d usually do at home.

Paul: I saw there were folding mobile phones at CES. What can you tell me about this trend?

Manroop: I saw the Royale FlexPai foldable smartphone but didn’t see any others at CES. What I did notice though are new mobile phones where both sides are more functional. Currently, we only have the camera lens on the back side of our phones, but now manufacturers are thinking “what if one side was your standard Android-based screen and the other side was an eReader?” Right now people are buying two separate devices—a mobile phone and an eReader with lighting that’s easier on the eyes and helps you relax. Soon you’ll be able to combine both devices into one, a mobile screen on one side, eReader on the back. So when it comes to smartphone evolution it’s not just 5G and more powerful tech, it’s also about having a multi-purpose device that combines functionality and experiences.

Paul: Any updates out of CES as to when 5G is coming to smartphones?

Manroop: Vendors were making mention of it just like they were with 8K TVs, but it didn’t feel like something that was ready to go out to market this year. Phone vendors were more talking about the phone devices themselves.

Paul: 8K TVs had a presence at this year’s CES. Considering the current adoption rate for 4K TVs, do you feel we’re ready for 8K?

Manroop: 8K, at least initially, will be for the high-end enthusiast. Although I did hear that TV manufacturers are expecting early adoption for 8K to be faster than 4K adoption. At the same time, there won’t be much content available in native 8K when this technology launches. We saw a similar type gap with 4K tech vs. 4K content where it took some time for the content to catch up. Since there’s not going to be a lot of 8K content at launch, vendors were demonstrating upscalers. It’ll take 4K content and upscale it to 8K, that was shown off quite a bit. I can see this trend continuing too—TV technology is evolving faster than content is able to keep up.

Manroop: Modular MicroLED was also big at CES 2019. MicroLED uses square panels that you grid together on a wall or wherever. TV makers had different sizes for these panels. When connected the panels display an image and what was amazing is you couldn’t see the connection lines—it just looked like one big picture. What’s neat about this technology is in the future getting a bigger TV may simply involve buying more MicroLED panels.

Manroop: Another TV innovation at CES was the idea of rounded TV displays with non-traditional applications. I saw this roboty-looking thing, and its face had a curved screen that was playing Trolls the movie. The screen was probably around 18”. It got me thinking: if I put this in my kid’s room and it was his TV, it would look more like a toy. My son could watch his movies right on this robot in his room. Applications like this are breaking the barrier of what a TV should look like. I also saw a Bluetooth audio speaker that was cylinder shaped, and the very top had a rounded display with customizable images. Goes to show that rounded displays can have many different applications.

Paul: Learning toys were generating a lot of buzz at CES, anything that stood out for you?

Manroop: STEM toys are growing; they’re becoming a viable solution to compliment traditional learning methods. As a kid, back in the day, you’d get your book that would tell you how to do your ABCs or teach you motor skills. Now you’re using these STEM devices that interact with your phone or tablet. Learning toys have been around for some time, but they’re getting better and more polished now. One that I liked was a programmable Harry Potter wand. What you do is customize actions to perform specific commands. For example, after you complete a 360-degree counterclockwise motion it performs some kind of command. If you swipe to the left or the right, it’ll do something else; children can program the wand and go through that learning experience.

Paul: eHealth is another big talking point from CES, what were some of the innovations you saw?

Manroop: There were a lot of solutions around mattresses. For example, there was a mattress that had a “cool” component to it, so you’re not sweating at night when you’re sleeping. The mattress had a device that blew cool air through it, saving you the need to reinvest in a new mattress—you’re sleeping even better using your existing bed. I also saw a bunch of eye covers. Traditionally you put an eye cover over your eyes and fall asleep. Now they’ve embedded technology into covers to massage your eyes or play soothing audio to assist you in falling asleep. Toothbrushes were talked about too. We’ve had electric and app-based toothbrushes for years, but now the brushes are getting even more clever and making it a learning experience for children. At CES they had toothbrushes with an app for your tablet that lets children see themselves brushing their teeth. You could make it interactive too, like having bubbles float up on the screen to make cleaning more fun.

Manroop: The excitement around electronics for kids was also big at CES. A good example is the unicorn headphones trend that’s been around for some time. The popularity around the unicorn emoji spawned lots of products, like unicorn apparel, unicorn pool floaty devices, and unicorn headphones. You’d see these unicorn headphones on display across many vendor booths. Headphones no longer need to look like regular headphones; there’s an audience out there within the younger demographic for colourful headphones with a unicorn horn and ears. It’s now a cool thing to walk down the street with. Kids TVs were also at the show. There was a TV with a high-definition 24” panel and a built-in audio speaker at the base. What was neat is the volume and decibels were capped out to make it more kid-friendly. So instead of putting a traditional TV in your son or daughter’s room, this is a specifically-branded kids TV preloaded with children apps. That way as a parent you don’t have to worry about the volume getting too loud and hurting their eardrums, and can rest easy knowing the apps are child safe.

Paul: So many neat innovations coming out of CES 2019. Looking forward to learning more about these products as they get closer to market. Thank you so much for your time!