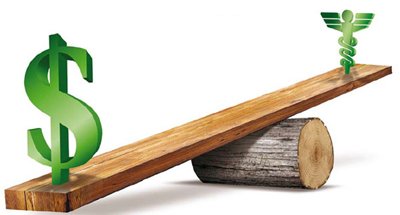 The Triple Aim is a framework developed by the Institute for Healthcare Improvement (IHI) that describes an approach to optimizing health system performance. It is IHI’s belief that new designs must be developed to simultaneously pursue three dimensions: Improving the patient experience of care (including quality and satisfaction); Improving the health of populations; and Reducing the per capita cost of health care. (IHI) It is the third and often mentioned but often forgotten aim that will be the primary focus of this analytics article.

The nation's largest payer, Medicare, recently reported that spending per capita was $9,171 in 2015. Following is a breakdown of the costs:

$690 prescription drugs (part B) and hospice

With this breakdown it, is clear to see why healthcare systems are under increasing pressure to derive greater value as aging populations, increased longevity and chronic health problems, have become a significant challenge. In fact, the US health care system is the most costly in the world, accounting for 17% of the gross domestic product with estimates that percentage will grow to nearly 20% by 2020. (CMS)

As I heard one representative from a well-known system state, no hospital wants to provide ineffective care that is costly. However, the vast majority of healthcare systems do not have the financial reporting systems in place to back that statement up. Most cannot reliably pinpoint just how much a service costs and whether or not it is profitable.

This is not to say that we cannot trust healthcare financial system accuracy.  To the contrary, hospitals, even not-for-profits, have very reliable, heavily audited and highly regulated general accounting requirements and most have adopted control systems such as Sarbanes Oxley.  The problem is, healthcare remains very fragmented.  Most of us have been patients and can attest to this (some argue you need a masters in healthcare finance just to figure out your bill).  Truth is, financial systems and data, even at very large integrated systems is so fragmented and complex that most are challenged when it comes to timely, service level financial data that is accurate.  Ask any manufacturer outside of healthcare whether or not a customer or product is profitable and they will answer with precision but not so for a healthcare provider.

This, however, is changing.  I would suggest that while EMRs have grabbed most of the IT investments over the past 10 years, that will likely swing to Financial Systems in the coming years. This article intends to explain the various types of financial reporting systems that should be considered and will offer a few suggestions as readers move forward in this area.

DSS attempts to combine the use of models with traditional data access and retrieval functions.

DSS specifically focuses on features which make them easy to use by non-computer-proficient people in an interactive mode.

Models are used to solve primarily two concerns. First, significant costs such as medications, supplies and labs are often reported in the general ledger as support costs and thus managed as an expense within the support center (for example the Pharmacy Department) as opposed to the patient care service line. What a DSS does is use billed charges and cost drivers to reallocate these costs as well as any overhead back to the Service Line so that the user has an estimate of the total cost to deliver the service. Second, the healthcare billing process is far from being timely or precise. While gross charge and contract discounts are known at the time of billing, the actual payment may vary significantly as well as go unresolved for months while moving through the claims authorization and approval process. In fact, in many cases the bigger the claim the longer the deliberation, debate and payment. In this case contracts, payer statistics and final accounting data can be used to predict what the payment will be as opposed to having to wait for final payment.

While these techniques can be very useful for high-level planning they can be confusing and a challenge to maintain at a granular level (for example when interrogating a specific procedure or setting specific targets for a physician). After all, they are really estimates as opposed to actuals. Just like other forecasting and estimating tools a lot can be done to refine these models, manage precision and improve utility but they will never be perfectly accurate.

That brings us to the subject of Relative Value Units (RVUs). RVUs are part of the system Medicare uses to decide how much it will reimburse physicians for each of the 9,000-plus services and procedures covered under its Physician Fee Schedule, and which are assigned current procedural terminology (CPT) code numbers. The dollar amount for each service is determined by three components: physician's work, practice expenses, and malpractice insurance.

From a practice management perspective, understanding RVUs is important as they are the language the payers speak when contracting, and like it or not, RVUs are the cornerstone for allocation of indirect costs within DSS systems. (Modern Medicine)

Activity Based Costing and TBABC

Activity-based costing (ABC) is an accounting method that identifies the activities that a firm performs and then assigns indirect costs to products. An activity-based costing (ABC) system recognizes the relationship between costs, activities and products, and through this relationship, it assigns indirect costs to products less arbitrarily than DSS methods. (Investopedia) Activity based costing systems are more accurate than traditional DSS because they provide a more precise breakdown of indirect costs. However, ABC systems are more complex and more costly to implement. The leap from traditional DSS to activity based costing is difficult due mainly to the time and effort required to develop and maintain (not only from Accounting and IT staff but all leaders that manage Service or Support Lines). The following steps provide the basic tenants of the system: Identify activities, Define the cost of the activities, Define the cost drivers of the activities, Define the volume of cost drivers, Define the unit cost per cost driver for each activity, and calculate the cost per product or service.

In 2004, Kaplan ‘‘the father of Activity Based Costing’’ reviewed his method and accepted the criticism that ABC requires too much work and that it is difficult for a company to maintain it over time. Therefore, Kaplan introduced Time-Driven ABC (TDABC) as a new solution. TDABC attempts to simplify the entire ABC process by focusing exclusively on the time characteristics of an activity. The time-driven approach consists of six steps: Identifying resource groups and the activities for which they are used, Defining the costs of each group, Estimating the practical capacity of each group, Calculating cost per time unit, Determining the required time units for each activity, and Calculating cost per transaction. While the TDABC methods reduce complexity as well as effort, it too is far more costly than the modeling methods used within DSS.

So What's the Solution?

Even with its' drawbacks DSS continues to be the broadest and most complete solution available today. That said, the only "activities" that can be analyzed are those that are charged.   Many charges today are bundled (for example bundled within room rates) as opposed to directly charged. I would suggest that this might be an area to consider as you design your revenue management system as well as think through analytics needs. Detailed charge capture does not curtail the ability to bundle charges and discounts to the consumer or payer and with today's technology most charges can be automatically captured.

As the demand for analytics increases more and more staff and leadership will ask for access to the DSS data. They may not understand how the data is derived and will expect both precision and timeliness beyond that of the typical DSS user. To prepare for this, you should invest in DSS Optimization as well as Education. Detailed financial audit and reconciliation will be required as will continuous review of the cost and revenue models. Be sure to transparently educate new users as well as have quick references available as there will be a learning curve for this new user type.

Encourage the use of actual costs and revenues as well as leading indicators to set targets as opposed to relying on the estimates derived by the models. The purpose of the DSS is to point the end user in the right direction for improvement as well as reinforcement (that change is taking hold). Also supplement DSS with tools such as ABC, TDABC, LEAN and DMAIC to drill deep into processes that need to be improved or assessed for contracting.

Use "big data" and "machine learning" to continuously improve the models.  Use multiple models and fit or blend them to get make the data predictions as accurate and as detailed as possible. This will enable you to not only provide a timely projection of the business but will also give you insights into what is to come.

Over the next 5-10 years the focus on value and cost containment are sure to be among the primary concerns for the entire Healthcare sector.

“The use of low-value care is more than just a small problem in the United States; the Institute of Medicine indicated an estimate of $765 billion wasted health care expenditures in 2013. Solutions to measure, identify, and eliminate low-value care, however, are challenging and complex.” (Health Affairs)

While consolidation, the effective use of EMRs and new innovations in care delivery will likely continue to be in the spotlight for most Healthcare executives, they will also be looking for solutions to make decisions as to what service lines are ripe for investment as well as divestiture. DSS systems (coupled with detailed process and cost analysis methods) are likely going to come into focus for most Providers. In the current state they are likely to fall short of expectation.  To proactively avoid this issue, analytics teams should focus on optimization programs that include detailed (and standardized charge capture), reconciliation and data release processes, education and talent management, model accuracy and innovation in the area of advanced analytics and forecasting.

Why Every Organization Needs to Be in the Cybersec...

The future workforce is coming… is HR ready?

End-to-End Email Security Solution That You Can Tr...