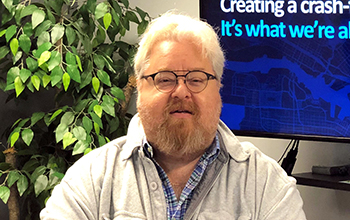 Unsafe driving behaviors are a growing concern across the world. Driving under the influence, distracted driving, fatigue, and speeding contribute to over 1.35 million deaths annually across the world! That’s about 3,700 people, especially pedestrians, cyclists, and motorcyclists, dying every day in road traffic crashes (source: World Health Organization). Moreover, the number of people who suffer injury or are disabled amounts to several million more.

While it does take a huge toll on the affected families, road traffic crashes also cost most countries 3% of their gross domestic product. For companies, it means a lot of money in terms of compensation, lost workdays and damage.

A lot can change by bringing awareness about safer driving behavior. A lot more can change with technology. It can help bring behavioral changes at a larger scale by gaining a deeper understanding of the risk causing scenario and enabling drivers to make the right choice at the right time in order to avert crashes.

Established in 1996 in Huddersfield, the United Kingdom, eDrivingSM got a breakthrough in 2002 when it launched the Virtual Risk Manager® (VRM) platform. This ultimately became the foundation of MentorSM, it's smartphone mobile app that today caters to about 1,000,000 drivers in 96 countries.

eDriving is uniquely positioned at the intersection of driver safety, risk management, telematics, data/analytics, and insurance. Over the past 24 years, the company’s research-validated programs have been recognized with over 90 awards.

Mentor by eDrivingSM is a smartphone-based solution that uses telematics sensors available in iOS and Android devices.

At the driver level, Mentor uses the smartphone sensors to collect and analyze driver behavior data, most predictive of crash risk, including acceleration, braking, cornering, speeding and phone distraction. This is coupled with an analytics engine developed in partnership with FICO® to score each individual driver based on those five attributes. This has been validated as being able to predict the likelihood of future crash involvement.

To help fleets manage, monitor, and optimize their reporting obligations, Mentor also incorporates in-app Driver Vehicle Inspection Reporting (DVIR), which guides drivers through a checklist inspection at the beginning and end of their day. Mentor also has the First Notice of Loss (FNOL) application that allows a driver to submit collision information and photos directly through Mentor to Fleet and Accident Management as well as Insurers to minimize “total claims cost”, by about 25-40%.

"As part of a broader risk management platform, VRM, eDriving provides organizations with everything they need to establish safety as a strategic imperative, and support drivers and managers as they strive to create a crash-free culture®," adds Ed.

Under Ed’s leadership, Interactive Driving Systems' flagship product, VRM, has trained over a million fleet drivers, earned over 90 awards, and has worked with some of the world’s most successful businesses, including BT, Nestlé, Zurich, Cummins, Pfizer, Siemens, and Johnson & Johnson.

As a pioneer in the development of telematics-based safety solutions and a veteran of the fleet risk management industry for over 20 years, Ed has helped transform the way companies proactively manage risk and prioritize the safety of their employees on a daily basis. His passionate advocacy and leadership efforts have been instrumental in initiating and maintaining collaborative industry benchmarking initiatives.

Andy has been working with CEO and Founder Ed Dubens since 1994. Instrumental in the initial technical development of VRM, Andy has overseen the continued evolution of the platform from an offline CD-ROM to the cloud-based program of today.

In 2014, Andy led the team in achieving the British Standard Institute’s ISO/IEC 27001: 2013 standard for information security management and ensured the company’s comprehensive security systems continue to meet the highest standards, resulting in re-certification in 2018.

Even today the internationally recognized program involves over 60,000 drivers.

eDriving: At the Forefront of Driver Risk Management, Now and in Future

As transportation progresses into a hybrid period where human-operated and autonomous cars co-exist and at-work mobility is evolving to incorporate ‘on-demand’ travel options, such as ride-hailing, bicycling, car-sharing, and more, the environment for at-work drivers is set to change beyond recognition.

In 2020, eDriving will launch Mentor VISION. This will add inward- and outward-facing camera options to further enhance the risk and claim management functionality of the Mentor eco-system that reacts to the FICO® Safe Driving Score behaviors triggered by the driver.

"While it is critical for risk management companies to evolve to keep up with the challenges drivers are facing, eDriving’s patented closed-loop approach to risk management will remain as effective in the future as it is today. By instilling a crash-free culture in companies and improving the attitudes and behaviors of drivers in order to avoid incidents from happening, the world can become a safer place to drive," concludes Ed.

Headquarters/Location: New Jersey, the United States of America and

Every two minutes a bicycle is stolen in Germany

Are Drones Part of Your 2018 Strategy?

Articulate University IT Spend by Portfolio to Add...

Circle B and Rittal opt for maincubes AMS01 data c...

Will B2B2C outplay B2C in the insurance world?